Support Vector Machine (SVM) is one of the most powerful out-of-the-box supervised machine learning algorithms. Unlike many other machine learning algorithms such as neural networks, you don’t have to do a lot of tweaks to obtain good results with SVM. I spent quite a time reading articles, blogs, and online materials trying to get the gist of this performant algorithm and found that most of the tutorials out online are explaining SVM from a big overview, while treating the underlying mathematical background as a block box. I often still felt confused after I finished reading the whole article. What exactly is the problem SVM is trying to solve? How do we get the optimal hyperplane? How does SVM handle non-linearly separable data? Why use kernels? To fully understand the answers to these questions, we need to go under the hood and explore the mathematics behind SVMs and understand how they work.

In this blog post, I will focus on the underlying mathematical part of SVMs and this requires that you have at least some background in linear algebra and optimization theory.

Before we get into the SVM algorithm, let’s first talk about some definitions we need to use later.

Length of a vector

Direction of a vector

The dot product of two vectors returns a scalar. It gives us some insights into how the two vectors are related.

Figure 2 shows two vectors x and y and the angle \(\theta\) between them. The geometric formula of dot product is defined as: 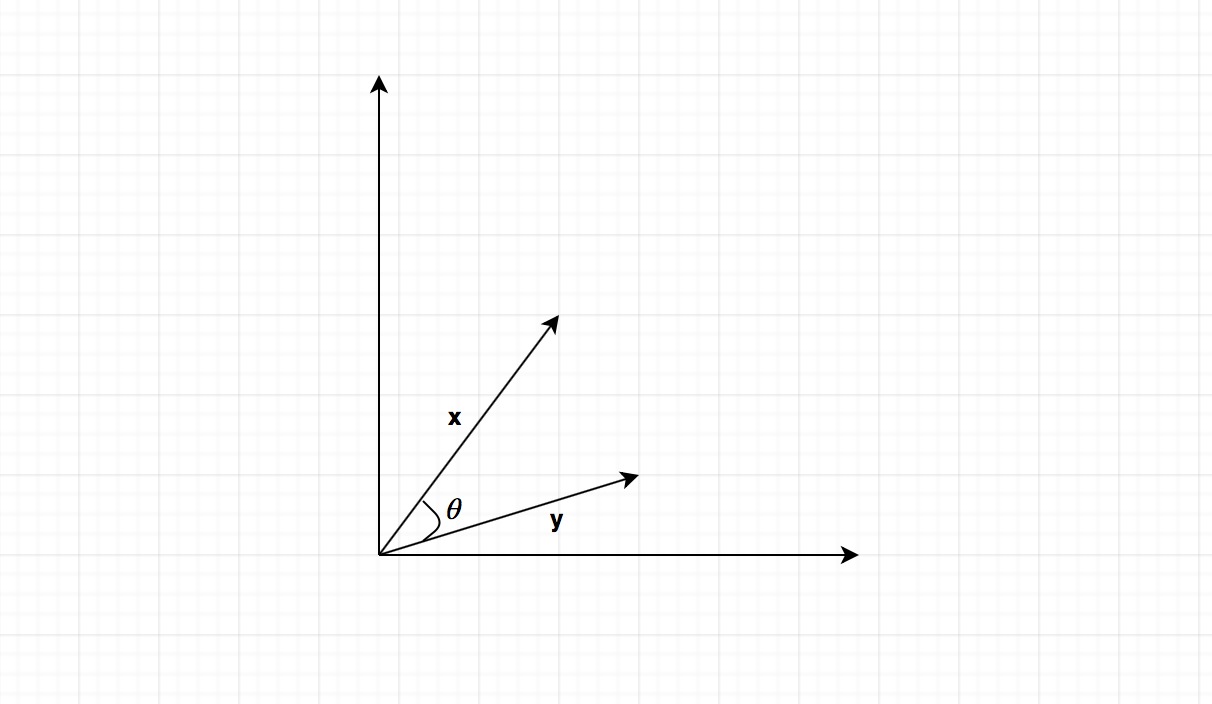 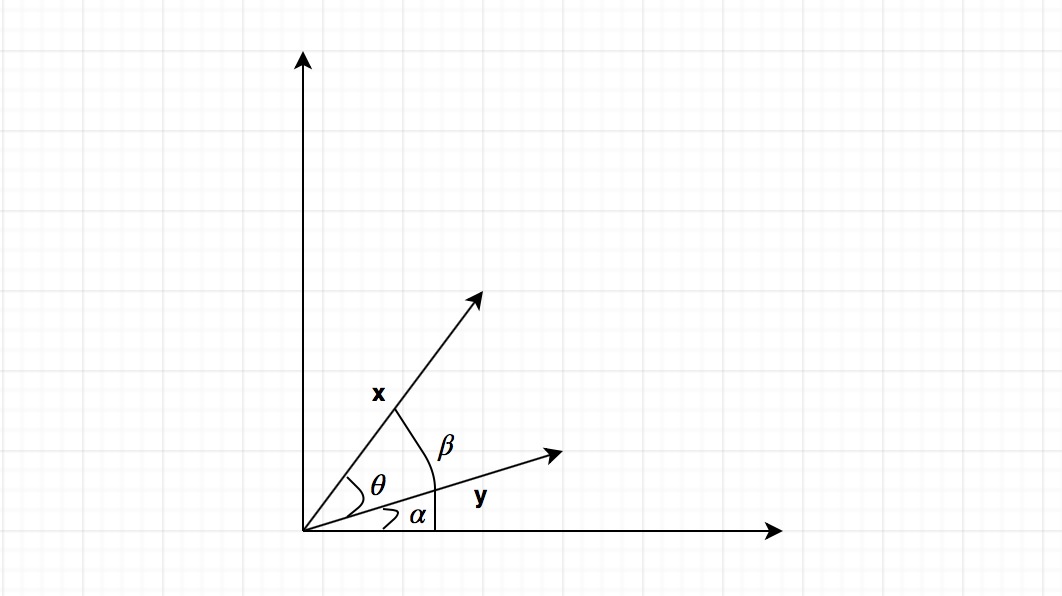 We substitute this into the geometric dot product formula, we get:

This is the algebraic formula of dot product. In general, dot product can be computed as the following for two n-dimensional vectors: 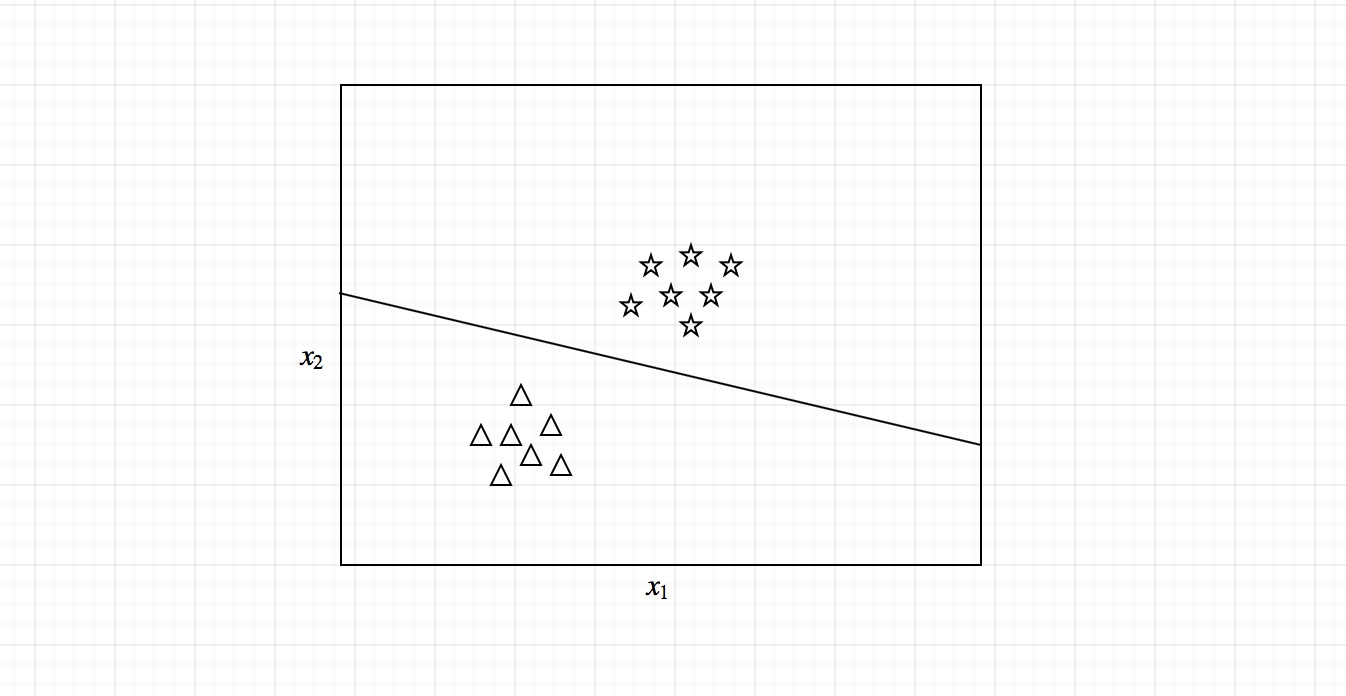 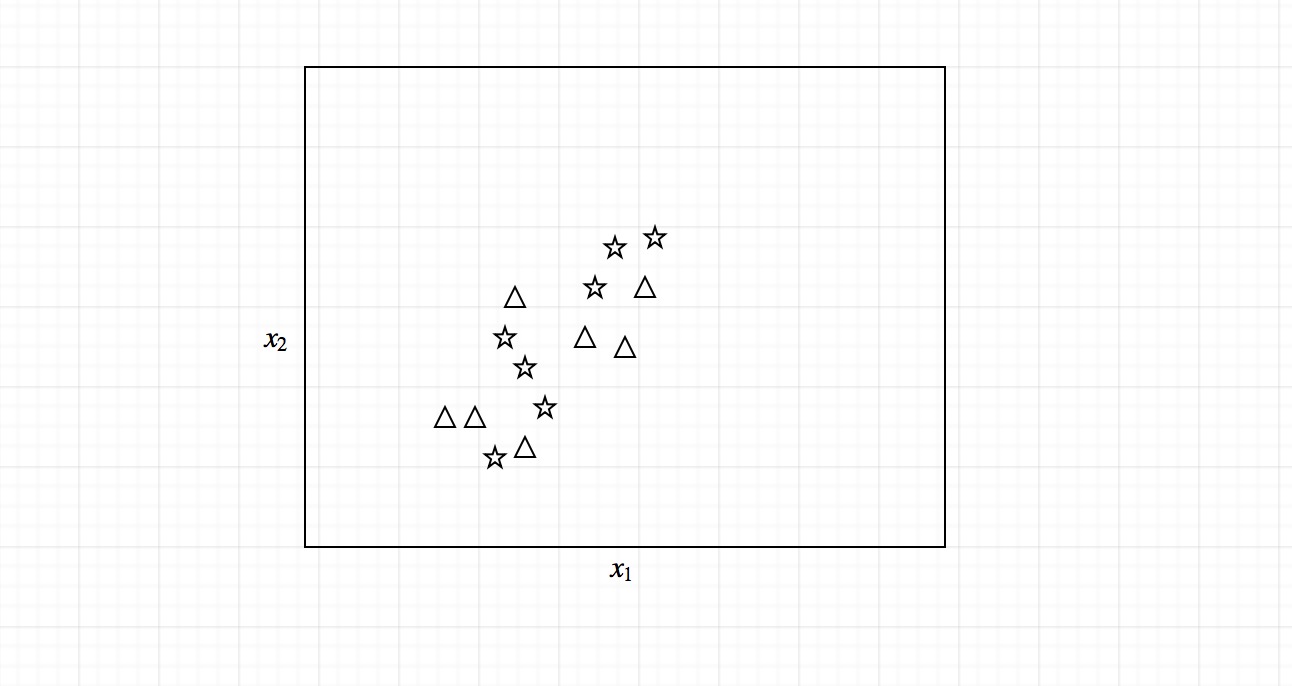 Then, the question arises when there are more than three dimensions. What do we use to separate the multi-dimensional data? We use hyperplane. How could we define a hyperplane?

This equation is derived from two-dimensional vectors. But in fact, it also works for any number of dimensions. This is the equation of the hyperplane.

So basically, the goal of the SVM learning algorithm is to find a hyperplane which could separate the data accurately. There might be many such hyperplanes. And we need to find the best one, which is often referred as the optimal hyperplane.

If you are familiar with the perceptron, it finds the hyperplane by iteratively updating its weights and trying to minimize the cost function. However, if you run the algorithm multiple times, you probably will not get the same hyperplane every time. SVM doesn’t suffer from this problem. SVM works by finding the optimal hyperplane which could best separate the data.

The problem with this metric is that it could fail to distinguish between a good hyperplane and a bad one. Because we take the absolute value of \(w\cdot x + b\), we could get the same value for a correct and an incorrect hyperplane. We need to adjust this metric.

When comparing hyperplanes, the hyperplane with the largest \(F\) will be favorably selected.

When comparing hyperplanes, the hyperplane with the largest \(M\) will be favorably selected.

The problem of finding the values of w and b is called an optimization problem.

To find the values of w and b of the optimal hyperplane, we need to solve the following optimization problem, with the constraint that the geometric margin of each example should be greater than or equal to \(M\):

If we rescale w and b, we are still maximizing M and the optimization result will not change. Let’s rescale w and b and make F=1, the above problem can be rewritten as:

We can restate the SVM optimization problem using the Lagrange multiplier method.

Lagrange stated that if we want to find the minimum of \(f\) under the equality constraint \(g\), we just need to solve for:

\(\alpha\) is called the Lagrange multiplier.

To solve for \(\nabla \mathcal{L}(w,b,\alpha)=0\) analytically, the number of examples has to be small. Thus, we will rewrite the problem using the duality principle.

Equivalently, we need to solve the following Lagrangian primal problem:

More accurately, \(\alpha\) should be KKT (Karush-Kuhn-Tucker) multipliers because we are dealing with inequality constraints here. But we will use the term Lagrangian multipliers for continuity.

Let’s see what the dual problem is for the above primal problem.

The Lagrangian function is:

For the dual problem, we have that:

The dual problem is thus stated as:

The advantage of the Wolfe dual problem over the Lagrange primal problem is that the objective function now only depends on the Lagrangian multipliers, which is easier to be solved analytically.

Note because the constraints are inequalities, we actually extend the Lagrange multipliers method to the KKT (Karush-Kuhn-Tucker) conditions. The complementary slackness condition of KKT conditions states that:

\(x^\star\) are the point/points where we reach the optimal. The \(\alpha\) value is positive for these points. And the \(\alpha\) value of other points are close to zero. So \(y_i(w\cdot x^\star + b)-1\) must be zero. These examples are called support vectors, which are the closest points to the hyperplane.

Compute w and b

After we solve the Wolfe dual problem, we obtain a vector of \(\alpha\) containing the Lagrangian multiplier value for every example. We can then proceed to compute w and b, which determines the optimal hyperplane.

According to the equation above:

To compute the value of b, we got:

Thus, we could compute b as:

S is the number of support vectors.

We can solve the Wolfe dual problem using some package or library analytically. For example, we can use a Python package called CVXOPT, which is for convex optimization. This package provides a QP solver for quadratic programming problems. We can rearrange our dual problem, state the required parameters, feed them to the QP solver, and get expected solution. The solution will contain the values of Lagrange multipliers for each example. We can then compute w and b and get the optimal hyperplane. I will not list the code here cause it is out of the scope of this article, but you are free to implement it on your own, which should not be very difficult.

In practice, most machine learning libraries use an algorithm specifically created to solve this problem quickly: the SMO (sequential minimal optimization) algorithm. Compared to CVXOPT QP solver, SMO tries to solve a simpler problem and works quite faster. I will not state the details of SMO, but you can find more materials online and learn more about it.

The above SVM formulation is called Hard Margin SVM. The problem with Hard Margin SVM is that it does not tolerate outliers. It does not work with non-linearly separable data because of outliers. The reason is that if you remember our initial optimization problem the constraints are \(y_i(w\cdot x_i+b) \ge 1\) for each example. For the optimization problem to be solvable, all the constraints have to be satisfied. If there is an outlier example which makes the constraint not be satisfied, then the optimization will not be solvable. In the next section we’ll talk about how to deal with this limitation using a variant called Soft Margin SVM.

The problem with Hard Margin SVM is that it only works for linearly separable data. However, this would not be the case in the real world. It is most likely that in practical cases the data will contain some noise and might not be linearly separable. We’ll look at how Soft Margin SVM handles this problem.

Basically, the trick Soft Margin SVM is using is very simple, it adds slack variables \(\zeta_i\) to the constraints of the optimization problem. The constraints now become:

One technique to handle this is to use regularization. For example, we could use L1 regularization to penalize large values of \(\zeta\). The regularized optimization problem becomes:

Also, we want to make sure that we do not minimize the objective function by choosing negative values of \(\zeta\). We add the constraints \(\zeta_i \ge 0\). We also add a regularization parameter C to determine how important \(\zeta\) should be, which means how much we want to avoid misclassifying each training example. The regularized optimization problem becomes:

Again, if we use Lagrange multipliers method like above, and we do all the hard math, the optimization problem could be transformed to a dual problem:

Another way of thinking of C is it gives you control of how the SVM will handle errors. If we set C to positive infinite, we will get the same result as the Hard Margin SVM. On the contrary, if we set C to 0, there will be no constraint anymore, and we will end up with a hyperplane not classifying anything. The rules of thumb are: small values of C will result in a wider margin, at the cost of some misclassifications; large values of C will give you the Hard Margin classifier and tolerates zero constraint violation. We need to find a value of C which will not make the solution be impacted by the noisy data.

The problem is, if we have a large dataset containing, say, millions of examples, the transformation will take a long time to run, let alone the calculations in the later optimization problem. Let’s revisit the Wolfe dual problem:

To solve this problem, we actually only care about the result of the dot product \(x_i\cdot x_i\). If there is a function which could calculate the dot product and the result is the same as when we transform the data into higher dimension, it would be fantastic. This function is called a kernel function.

So, the kernel trick is: if you define a kernel function as \(K(x_i,x_j)=x_i\cdot x_j\), we rewrite the Wolfe dual problem:

This is a small change, but is actually a powerful trick. What it does is to calculate the result of a dot product performed in another space. We now have the ability to change the kernel function in order to classify non-linearly separable data.

There are multiple kernel types we could use to classify the data. Some of the most popular ones are linear kernel, polynomial kernel, and RBF kernel.

The linear kernel is defined as:

This is the same as the one we used in the above discussion. In practice, you should know that a linear kernel works well for text classification.

The polynomial kernel is defined as:

This kernel contains two parameters: a constant c and a degree of freedom d. A d value with 1 is just the linear kernel. A larger value of d will make the decision boundary more complex and might result in overfitting.

The RBF kernel is defined as:

In practice, it is recommended to try RBF kernel first cause it normally performs well.

If you are getting this far, congratulations! I hope this is not a too long article for you to read and a too arcane explanation for you to understand the gist of SVM. Sometimes layman’s approach is not always a good one, especially for experienced readers or researchers who want to master the underlying logic of an algorithm. Then you have to, I hate but I gotta say, dive into the hard math and understand the formulas.

A data visualization of the impact of tariff spat on midterm election
The tarrif spat between US and China is on the brink of escalating to a full-blown trade war, which would be a disaster for the global economy. On Tuesday, April 3rd, the Trump administration propo...
2018-04-09
@Shuzhan Fan
life    data mining
Landsat 8 data access from Google Cloud Storage
### Landsat 8 bandsLandsat 8 is one of NASA's EOS (Earth Observing System) satellites. It was launched in February *2013* and was aimed to replace its predecessor Landsat 7. The satellite collects ...
2018-05-18
@Shuzhan Fan
remote sensing    cloud