After training the machine learning classification model, we should always evaluate the model to determine if it does a good job of predicting the target value on new unseen data. Among the various metrics that could be used to evaluate the predictive power of a machine learning classification model, several most commonly used ones are: accuracy, precision, recall, F1 score, and AUC.

One common headache newcomers to machine learning have is to differentiate the nuances among the distinct evaluation metrics. I came across the same issue when I was in my first machine learning class. Back to that time, I searched extensively online and read a bunch of articles trying to figure out which one is which. And I found that the most efficient way to untangle this and fully understand the concepts is to use a contingency table, or called a confusion matrix.

Note: For the ease of demonstration and explanation, below I will talk in case of binary classification, in which the target variable only has two classes to be predicted.

So, here you go. The following table shows the formulas for accuracy, precision, recall, and F1 score. 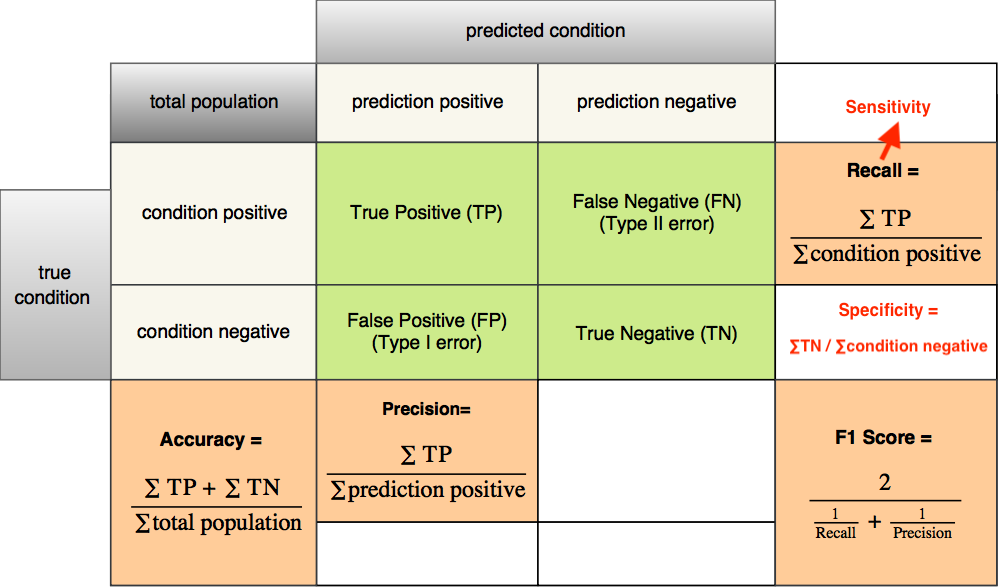 Type I and Type II error

Now, let’s get into the discussion of the first four model evaluation metrics. First, the definitions:

F1 score: the weighted average of precision and recall.

Then, we could get:

ROC is composed of sensitivity and specificity:

So how is ROC plotted exactly? Let’s look at an example.

Again, assume your classification model is to predict whether or not an image contains a cat. Your testing set contains 100 images. And 70 images actually contain a cat, 30 images do not.

These are just a few toy points you could possibly get. If you keep selecting different cut-off points and you’ll end up with different sensitivity and specificity values and hence different points on the ROC curve.

As for which one/ones you should use and what constitutes good metrics, it really depends on the specific problem you are dealing with. When the distribution of the classes in data is well balanced, accuracy can give you a good picture of how the model is performing. But when you have skewed data, for example, one of the class is dominant in your data set, then accuracy might not be enough to evaluate your model. Let’s say you have a dataset which contains 80% positive class, and 20% negative class. This means that by predicting every data into the positive class, the model will get 80% accuracy. In this case, you might want to explore further into the confusion matrix and try different evaluation metrics.